It’s Thursday, and AllNews travels back in time to February 2012 when the current Special Adviser to Lagos State Governor Babajide Sanwo-Olu on Drainage and Water Resources, Joe Igbokwe said that Nigerian leaders, especially the ones from the North, are “playing games” with the country.

Many would argue that Igbokwe would not take such position today again.

At the time, Igbokwe tied the coming of the Boko Haram terrorist group to the emergence of former President, Goodluck Jonathan as Nigeria leader. According to him, “if General Buhari had won the election the murderers would not have raised even a finger”.

Nnewi, Anambra-born Igbokwe is today a chieftain of the ruling All Progressives Congress (APC) in Lagos.

For long, he has been a writer, pro-democracy activist, political analyst, policy analyst, author, widely read and vastly published commentator on national issues. Among his published works are “IGBOS: 25 YEARS AFTER BIAFRA” published in 1995, “HEROES OF DEMOCRACY” published in 1999, and co- authored, “2007: THE IBB OPTION in 2004” with his friend, Peter Claver Opara.

Igbokwe joined the Lagos State Government in 2006 as the pioneer General Manager of Lagos State Infrastructure Maintenance and Regulatory Agency (LASIMRA), and served there for more than 10 years. In 2015, he was appointed as the first Chairman of Wharf Landing Fees Collecting Authority (WLFCA) in Apapa, serving till his appointment as a member of the cabinet of Sanwo-Olu. 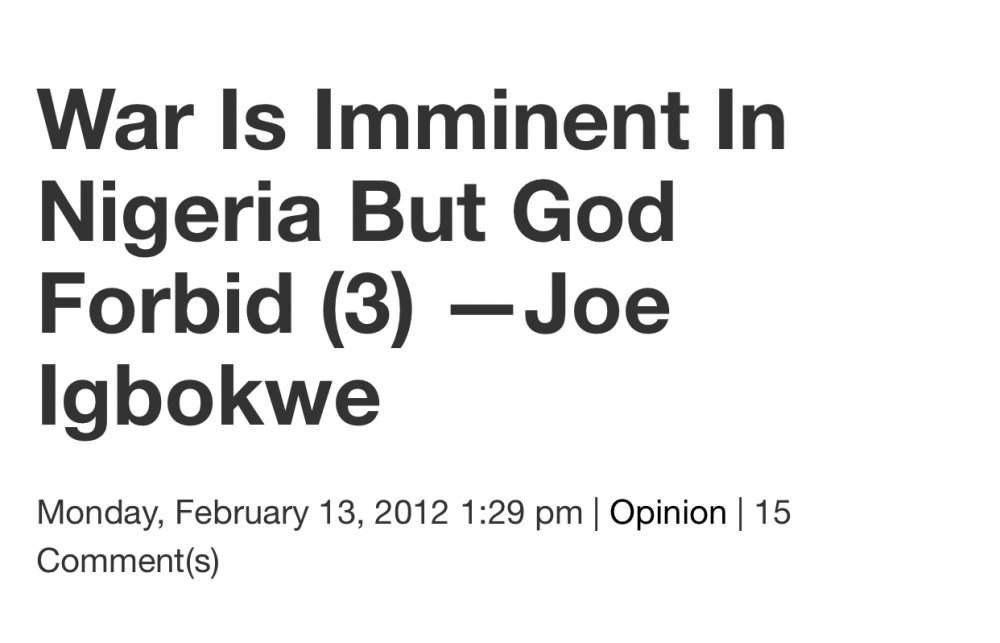 I have been compelled to write once again as Joe Igbokwe, and as usual I speak strictly for myself. My philosophy of service to humanity has pushed me again to speak the truth to power in Nigeria due to repeated primitive, senseless and idiotic threats and attacks to the sovereignty of Nigeria by the Boko Haram sect in Northern Nigeria. I am writing once again as a concerned Nigerian who wants Nigeria to be preserved and consolidated, simply because I feel we are better united. Yes, I want Nigeria to remain as a political entity but it must be based on social justice, respect for human lives, freedom, liberty, equity and rule of law.

Few days ago, Igbo nation buried 12 bread winners and a mother in Adazi Nnukwu, Anambra State brutally murdered by the Boko Haram sect in Mubi, Adamawa State. What many thought was a rumour turned out to be a stack reality that swept every sensible person in Anambra State, Igbo nation and Nigeria off their feet. What I saw that day provoked the man in me and I nearly lost my senses. Boko Haram, in slaughtering those innocent men and women seems to be telling Igbo nation and Nigeria to do their worst but Igbo have restrained themselves believing that there are still leaders in the North who can stand up to be counted. Yes, two wrongs can never make a right but tell me, is civility a sign of weakness?

Boko Haram has ‘successfully’ sent packing all the Youth Corpers from Southern Nigeria serving in the North and they are being deployed to Southern States as I write this. My sibling Mr. Innocent Igbokwe, a lawyer who is supposed to serve in Gombe State is now in Ekiti State. Boko Haram has ‘successfully’ driven bonafide citizens of this country to Cameroon and other African countries to seek protection. When Boko Haram sneezes now, Nigeria catches cold.

Now I have good reasons to believe that our leaders, especially Northern leaders, are playing games with Nigeria and they will be worst losers when the chips are down. These political criminals, murderers and nonentities tell us that Boko Haram is on their own in the afternoon and in the night they hand over weapons of mass destruction to them to continue to slaughter innocent Nigerians. They grin from ear to ear anytime President Jonathan visits the North as if they are his friend but under the cover of darkness they stab President Jonathan on the back. They deny anti-Jonathan plots in the morning and under the cover of darkness they swear that President Jonathan should die.

These political nonentities don’t worry about the economy of the North. They don’t worry about the obvious and self-evident truths that the North is now desolate, a land that devours its inhabitants, land soaked with blood of innocent children, wives and bread winners, the land similar to Thomas Hobbes’s state of nature where life is nasty, brutish and short, land where children are leading the elders, land of mass murderers, land of fools and land of shame. A school of thought tells me that a foolish constituency is the hobgoblin of small minds.

War does not recognise any face, it does not know anybody, and it does not respect any face. War situation is like throwing bombs in the market place. Your brother or sister may be there. Those who are encouraging Boko Haram under the cover of darkness may be the victims in the fullness of time. George Orwell teaches us that the ‘political language from conservatives to anarchists is designed to make lies sound truthful, to make murder respectable and to give an appearance of solidity to pure wind’. I repeat once again that Boko Haram came on board because Goodluck Jonathan was elected the President of Nigeria. If General Buhari had won the election the murderers would not have raised even a finger. Remember President Obasanjo and the Sharia politics. Oh my God, please tell these people that we understand this game very well even more than them.

One more thing, I hear that Boko Haram is targeting our own Professor Wole Soyinka for elimination. May Allah help Boko Haram to ‘achieve’ this and what will happen in Nigeria will shake the world. I want Boko Haram to remember that two gunshots were fired in Sarajevo by a school boy, Gevrilo Princip, 19, which killed Archduke Ferdinand and his wife, Archduchess Sophie, on June 28, 1914; and then the enmity between Austria-Hungary and Serbia escalated into World War 1. Out of sixty-five million young men who were sent out to the battlefields, some nine million never returned. When civilian casualties are included, a total of twenty-one million persons were killed. Some still talk about the outbreak of that war in August 1914 as the time when ‘the world went mad’. The two gunshots from that school boy had set the whole world on fire and ushered in a period of violence, confusion, and disillusionment that has continued in Yugoslavia to this day. Historians teach us that Actions Carry Consequences!

Oduduwa Republic: ‘Tinubu’ll be flushed in toilet, does not speak...

Amid Crisis, Deputy Chairman Takes Over...