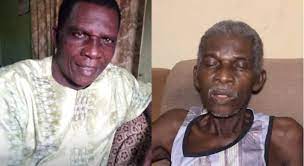 A veteran Yoruba movie actor, Raji Azeez, better known as Baba Atoli, on Thursday passed on after a long battle with sickness.

This was announced by one of his colleagues, Foluke Daramola in a post on Instagram on Thursday.

Daramola shared the deceased actor’s photo with the caption: “Sad we lost Baba Atoli. Such a shame.”

In May, the actor solicited financial support for the late actor, who was very ill at the time.

His wife, Olaide Raji, similarly stated that the actor was battling an undisclosed ailment.

“This sickness started in May 2021. We thought it was a minor thing when it started so we took him to one hospital where he spent four days. After that, we brought him home with the hope that he has fully recovered,” she had said.

“However, a few days later, we noticed that his condition worsened. It was at this point that people recommended that he should be taken to the Federal Medical Centre (FMC) in Abeokuta which we did.

“At FMC Abeokuta, several tests were carried out on him and we spent a lot of money. But a few days before his surgery, the hospital embarked on strike. We initially thought the strike would be called off after some days but it lingered. We eventually did the surgery and we took him home.

“The sickness, however, resurfaced again. We need the support of Nigerians to ensure he doesn’t die. I don’t want to become a widow.”

Baba Atoli’s death comes about a week after the death of Yinka Ogundaisi, an actor and filmmaker.

WHO emergency committee meets on monkeypox

Yoruba Group Rejects Move To Put Amotekun Under Control Of...

How Three Among 156 Pupils Abducted From Niger Islamiyya School...

Police Arrest Nigerian For Selling Drugs To Schoolchildren In South...